We've hit November and the weather is heating up, so naturally we have gelatine.

I decided to try making one of these 'Ice-Box cakes' from a Davis Gelatine advertisement.
There are two parts to this recipe - each of the variations starts with lining of the tin (I used a loaf tin as that was closest to the illustration) with a sugar, melted butter and crumb mix. I used the cornflakes suggested and my four year old had an awesome time crushing them in a bag.


"ICE BOX CAKE is made in a plain mould or cake tin. Cover the bottom and sides with a crusty mixture (see below), then fill with a delicious confection (see our recipes).Chill for 12-24 hours-do not freeze - unmould, cut and eat - enjoy.
CRUSTY COVERING: Melt 2 tablespoons butter, add 1½ cups brownsugar, cook for a few minutes till smooth, add 2 cups crushed cornflakes, biscuit or wafer crumbs. Mix well, press to the bottom and sides of the mould. Chill for 20 minutes or longer, then fill. Unmould by placing in warm water."

The variation I tried used marshmallows and fruit - I used bananas, as I had them, and used both pink and white marshmallows.

I'm not 100% sure the measurement is 3/4 pint of milk, because the font is small, italic and at an angle on the page, but less than that didn't seem right for the amount of egg yolk. 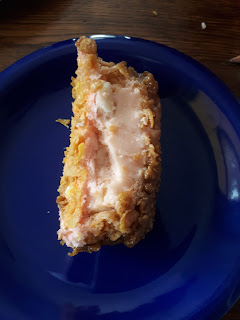 The texture was a bit weird, honestly, and neither my husband or I really liked it. I then froze it to see if that improved it at all, and I did enjoy that a bit better. Still not something I will make again.

Another feature was on using tinned foods, and I experimented with their 'Meat and Potato Puff'.

While this was fairly tasty and I thought could be a comfort food type of dish, my husband didn't think it was so different from just mixing stuff into mashed potato - he thought the 'puff'-ness didn't come through.

Last recipe this month was a reader submitted one for Orange Gingernuts.


My son also helped me make these, but sadly he refused to eat more than a bite because they were 'too spicy'. They are a strongly flavoured ginger nut and I adored them.