For many years now, that title would have read 'Knitting 1, Crafter 0' as knitting was a definite defeat for me.  I learned how to crochet first, you see, and it was the one that came naturally. As I've written before on an LJ craft blog


I love crochet. I'm competent at crochet, which is better than being 'good', as I understand it, because being good at crochet implies that I am reasonably fast and able to accurately complete intermediate to hard projects. Being competent, as I imagine it, includes that but also covers the ability to correct mistakes, to be able to look at the piece and tell what stitches I've been using, to really KNOW what the yarn is doing and how it will react to different stitches.  So learning to knit (again? I did once learn as a child, but not very well and I quickly abandoned the knowledge) has been disheartening because I am so incompetent. I cannot visualise the final product. I don't realise I've made a mistake while the stitches are still on the needle. I am a slave to the pattern and my instruction books.

I'm not really sure what prompted me to try another learn to knit class.  Probably looking at all these cute knit baby ideas online? Anyway, Morris & Sons was running a competition on their blog to win one of their classes, and while I didn't win it occurred to me that I had plenty of days free and it wasn't stupidly expensive...

All my other learn to knit attempts have been from books or being taught by family, so perhaps it was just the different approach of a stranger. Perhaps it was the basics coming back to me from previous attempts and realising I was better than the 'true' beginners in the class. Maybe it was having the anatomy of the stitch pointed out clearly.  Whatever it was, I got to the end of the class feeling more confident than I have ever been before about knitting. 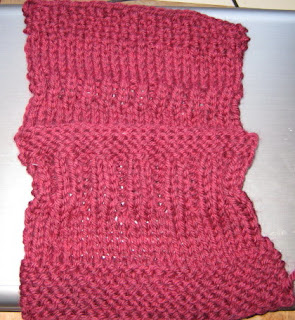 The sample above, done mostly in the class (I finished off the moss stitch and did the casting off at home) contains garter, stockinette, a 2-2 rib, reverse stockinette, a 1-1 rib, and moss stitch. No added stitches, no dropped stitches. I'm chuffed with how well it went. I don't think knitting will ever replace crochet as my go-to yarn craft, but I have my eye on a few baby projects.  Fingers crossed.
Posted by Rhiannon at 2:58 PM No comments:

Visits to my obstetrician involve a lot of waiting. It isn't that they are always running late, although as with any doctor's appointment there is an element of that. But I see the midwife first, then I return to the waiting room until I see the obstetrician. Usually I just take a book but last week I took a panel of the argyle baby blanket I am crocheting. ("English Beat" from Candi Jenson's Candy Blankies, for the very interested; I've changed the background colour to a cream rather than the yellow and the blues are a shade darker each. Pictures when finished.) I've never had that much conversation happening in the waiting room before! The receptionist, the midwife (who is a knitter) and another lady and I all had a nice chat about what I was making, and knitting vs. crochet, and why it is only worth working with nice quality wools.

I mention this because I've set myself the challenge of getting more conversations going about craft generally, and what I'm doing in particular. In a way it is leading up to launching Parlour Duck crafts as a business, when I need to be prepared to talk about what I'm doing, but it is also linked to promoting craft in public generally.  Working on projects in public seems like an obvious way of starting such conversations. I haven't yet got to the stage where I'm comfortable starting a conversation with someone with someone who is clearly watching what I'm doing, as I can't yet judge whether they are interested particularly or just in lack of anything else to look at on the bus!

Another technique, inspired by the talented Tanith Rowan, is wearing things I've crafted in public.  The week before last I did a learn to knit class at Morris & Sons, which I'll blog about soon, and I wore a cardigan I'd crocheted. When we were introducing ourselves, and I mentioned I crocheted, the teacher asked if I'd made what I was wearing, and I was happy to be able to say yes and it got several admiring comments. The cardigan actually is a bit baggy and very much an overshirt normally, but I wore it fastened over my ever-growing baby bump with a silver pin shaped like gum nuts, and it fell nicely open from that point. Far more stylish as maternity wear than its usual "lounging around the house" wear.

I can't help but think that I am missing some ways to start more craft conversations - any ideas?