A rather embarassingly long time ago, having read my sister talking about decorating display heads at our shared Jupiter Hollow blog, I picked up my own styrofoam head to decoupage at a Lincraft sale. I finally got around to doing it over the last fortnight. The small boy helped. With some modest interest in paper choice and ripping but enthusiastically when it came to paste. (We later decoupaged the cut out firetruck you can see in the foreground of the picture below. And a box. He really got into pasting.)
I selected a range of pink and green card-making papers which I got for free in various craft magazines.  And now that I have a classy decoupaged display head, I can take better photos of hats.

This cloche in variegated pink wool was I believe made from a magazine pattern that I've since discarded. I liked it because it has a facing, an unusual feature in crocheted hats. This means the underside of the brim is a separate piece, joined at the brim, giving extra weight and a crisp edge. This has been my go-to hat this winter.
The other hat I'm showing off today is my leaf beret. The original vintage pattern is from a Coats and Clark leaflet "Hats and bags" (number 74)  reproduced by Bramcost Publications. You can see why the original picture attracted me as I went though.
Their version is all in ivory, which probably gave a very subtle effect, but I embraced the leavy air in green and brown.

I don't think I handled the millinery wire around the edge of the crown very well so it lacks something of the crisp angle of the original. I adore it though.
I had to adapt the pattern slightly and there is one ambiguously worded part of the side crown instructions which I've completed one way here and am trying another alternative in the version I'm making for my mother.  But that's why we love vintage patterns.

I'm amazed at how much difference a display head makes to how the hats photograph. They look so polished! It almost makes me wish I'd done the decoupage a few years ago... except then I wouldn't have the memory of my son proudly showing off the head he helped mummy make in our Skype with my mother. That's worth three years of no decent hat photographs.
Posted by Rhiannon at 8:58 PM 4 comments:

A month of medical madness

June 16th was my birthday.  It was a nice day - my dad came down to visit for lunch, it was my husband's rostered day off as well, I had a roleplaying session that evening and there was cake. All good, low-key fun. I had the promise of yarn still to come as a present.

A few days later I got sick. The GP said it was a gastro virus, and I believed that right until the morning I woke up unable to see out of the top half of my left eye. Over the course of  the day spent seeing an optometrist and then in the emergency department, I lost it all. I had no perception of light in the left eye. I don't mind admitting I was scared out of my mind. They admitted me to the neurology ward that night.

Since then... it has been an overwhelming and reactive time. I've had an MRI of my brain and I've got a spinal MRI scheduled for later this week. There's been medicine. There's been so much blood taken for so many tests. I've had a lumbar puncture so they can test spinal fluid. And I've been having plasma exchange sessions which are freaky and draining and horrible and I can only be glad that I can do them as an outpatient (only spent five nights in hospital thank goodness) and that they are making a difference - my vision is returning rapidly.

I'm still waiting on more tests for a diagnosis but the doctors have hinted at what they think it is. I'm trying not to worry too much until I get said diagnosis.  Easier said than done!

While in hospital and fretting about my lack of vision I got my husband to bring in two hooks (9mm and 6mm) and some DK weight yarn and I did some experimenting with an almond stitch pattern I'd seen in Simply Crochet magazine and wanted to try.  The almond stitch is wavy rows of dc, htr, tr and dtr alternating with rows of dc with spike stitches in the lowest points. The example in the magazine is done in various shades of pink with dove grey in between and it looks very elegant.

The 9mm was way too big a hook for the yarn, It served its purpose - yes, I could see well enough with only one eye to crochet - but it created a big mess. I did get some comments from nurses and other patients in my bay.

On to the 6mm hook, I did this one in red and green yarn and it looks quite Christmassy.
Sunday was a friend's birthday party. A little while ago she had been to a spa and they'd used a crocheted wash cloth and I was going to make her two for her birthday. Sadly I was running behind, with about an inch and a half of one washcloth done in Tunisian crochet before my medical drama started. I was determined to give her at least one as a birthday present so hurried to get it done. 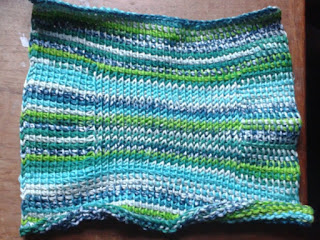 It got finished on the morning of the party so it isn't blocked, leaving it not square and a bit curly at the edges.  I'd made one for myself in silk but this friend is a vegan so I went with an eco cotton in a lively variegated green.

Even without blocking, I'm glad to have finished it in time and also relieved to know I'm recovering enough to craft.
Posted by Rhiannon at 8:08 PM 2 comments: